Betrayal of the Mind–OR–Embarassing Moments with Art Therapy

Awhile back, when my therapist was going to be on vacation for a week, which at the time felt like forever, I decided to give myself some homework.  I got some books from the library on art therapy.  I’ve been doing it on and off ever since.

ON–I do it because it helps bring things from my unconscious mind forward, and can be helpful in therapy.  Kind of like dreams.

OFF–sometimes I don’t do it because it helps bring things from my unconscious mind forward, and I don’t always like that.  Kind of like dreams.

In my on again, off again way, I have filled about 7 sketch pads with my randomness, some of it revealing, some mysterious, some dull.  Each sketch pad is more personal than a journal simply because I have more control over what I say in a journal.

If you haven’t tried art therapy, that may seem like an odd thing to say.  But I will give you an example of a time art therapy took me by surprise.  Part of the problem was that I had not intended to do art therapy at that moment, but the subconscious doesn’t care about little things like proper timing.

So, I was in my son’s Kindergarten Art Class.  They were learning Notan.  It is a form of art that uses contrasting colors and paper cutting to make designs.  Some notan is really intricate and beautiful.  You can see some google images of notan HERE

As I often did in that class, I helped my son with his project and then I made my own.  (I had so much fun in that class!)  After we all finished our pictures, the teacher had us hold them up (parents too) and show them to each other.  So I held mine up for this class of Kindergarteners and three or four other moms.  Then we sat them on the table and started on a second one.

That is when I looked down at mine, blushed furiously and turned it over so no one could see it.  This happened on a therapy day, so I took it to therapy.  My therapist burst out laughing when he saw it.  Then said, “Can I take a picture of it for your file?”

He just smiled, took a picture with his cell phone and told me he would email it to me.  Much later, I was glad that he did.  But it has taken me a year to overcome my embarrassment enough to post it here on the blog.  I’m sharing it to show you the power of the mind, and of art therapy. 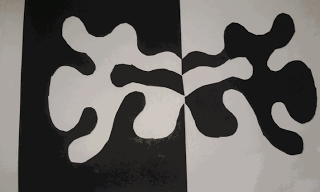 So….what were we talking about?  The weather…how about that fog we’ve been experiencing in the Seattle area. . .